ARLINGTON, WA— The Snohomish County Football Club began its second year of existence with two days of open tryouts on Saturday and Sunday  March 17 and 18 at Lakewook High School near Arlington, WA. The Steelheads saw 36 players and eventually decided to ask 28 back to form the bulk of this year’s squad.

The players were greeted by Steelheads volunteers who signed them in, took their pictures, and wished them well on the task at hand. Also stopping by were a few Founders Club members who watched some of the action and also picked up their first-ever official SnoCo FC scarves. 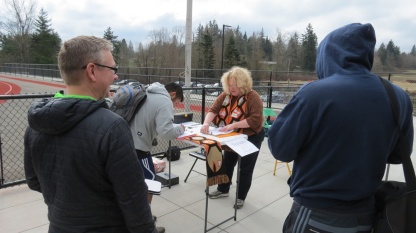 There are galleries from both days of tryouts now online at the Steelheads Facebook page. Below are videos of the action along with an interview with Head Coach Dagi Kesim about how the two days went.